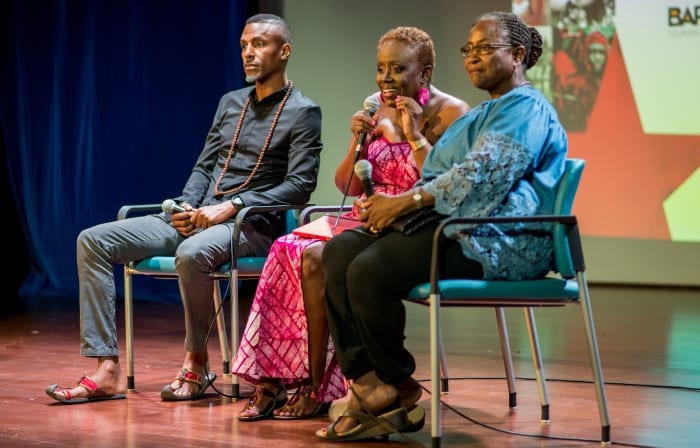 The film Panama Dreams is important for the younger generation.

These sentiments were expressed recently by Minister of Culture, Sports and Youth, Stephen Lashley, and the film’s director, Alison Saunders, on the sidelines of the film’s premiere at the newly renovated Daphne Joseph Hackett Theatre in Queen’s Park.

Praising the director, cast and crew for their hard work, the Minister said that there was a need to carry the story to the next generation.

“We have to do much more now to impress that story in the minds of our young people and we have the opportunity through film to be able to do that in a very powerful way. I credit them (the filmmakers) for taking it into the schools…they (the coming generation) have to be a part of this story,” Mr. Lashley underscored.

Director Alison Saunders, who echoed the Minister’s comments, said that while interviewing young Panamanians about the construction of the Panama Canal, she was surprised that many were unaware of the significant role West Indians played in its creation.

“When I realised the young people didn’t know who built the Canal I said, ‘wow this story has to be told’…. They need to be able to understand that this is relevant to their reality today. It’s a source of great pride…what these people achieved in building one of the Seven Wonders of the modern world with their bare hands, pickaxes and shovels,” she stated.

Ms. Saunders encouraged schools to attend the screenings planned for tomorrow, Friday, March 23, and Tuesday, March 27, as she felt it was important for young people to be inspired by the achievements and sacrifices of their ancestors.

The director further said that she was “humbled and thrilled” at the response to the film and the interest it was already stimulating among Barbadians in discovering and sharing the stories of their connections to the Panama Canal experience.

Various patrons remarked that the film was “beautiful and profound”, “thought provoking” and overall “excellent”.

The film opens on Wednesday, April 4, to the general public.