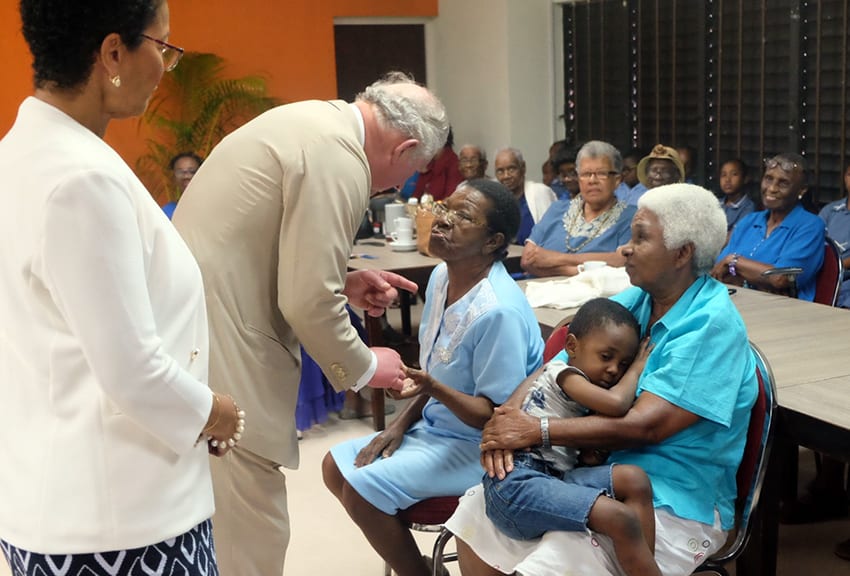 HRH The Prince of Wales chats with one of the seniors at the Soroptimist Village while visiting the facility yesterday. Accompanying Prince Charles on his visit was President of Soroptimist International of Barbados, Judith Toppin (left). (GP)

Seniors and the youth were stars of the show at the Soroptimist’s Senior Citizens’ Village yesterday, as they took to the stage to entertain visiting British Royal, the Prince of Wales.

Students of the Eden Lodge Primary School performed poetry and song.  In the poem, Island Treasure Barbados, penned by Deighton R. Alleyne, the students had some sound advice for Prince Charles: “Barbados is the place to go, when you want to get away from the snow”.  They also sang the Merrymen’s Beautiful Barbados.

It was then the turn of the seniors, all members of the Village’s Activities Centre, who showed off their line dancing skills to TC’s 2017 Soca hit, Paradise.  Their performance received resounding applause from the audience.

At the end of the performances, Prince Charles was presented with two gifts. The first, presented by Head Boy of Eden Lodge Primary, Nathan Greaves, and Head Girl, Adia Bonnett, was a mahogany tray in the shape of Barbados, designed by Medford Mahogany.  The second gift, a copy of Churches of Barbados, authored by Sir Henry Fraser, and donated by Miller Publishing, was presented by Evelda Walker, a resident of the Soroptimist’s Village.

On hand to greet Prince Charles, as he arrived at the Village, were Minister of People Empowerment and Elder Affairs, Cynthia Forde; Parliamentary Secretary in that Ministry, Neil Rowe; and Minister of International Business and Industry, Ronald Toppin, who is MP for St. Michael North, where the Soroptimist’s Village is located.

Before leaving, the prince spent some time interacting with both the seniors and the schoolchildren, who were accompanied by their principal, Grace Wickham.