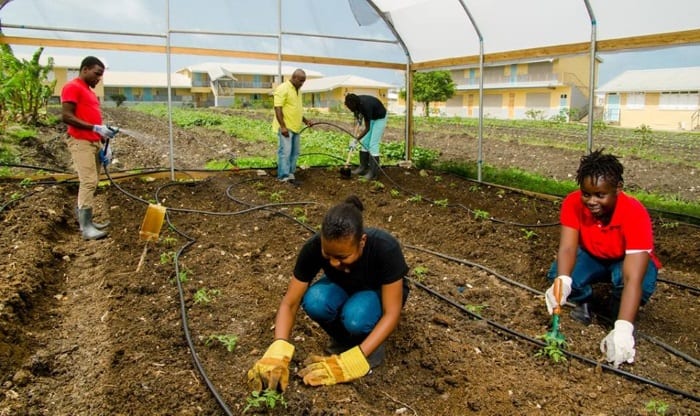 Pleased that efforts are continually being made to reinstate agriculture as a prominent economic and social activity in Barbados, Small Business Minister, Dwight Sutherland, wants to see more youth involved in this sector.

The Minister, who is also responsible for Entrepreneurship and Commerce, stressed this today as he addressed the launch of the City of Bridgetown (COB) Credit Union’s Business Boot Camp, at COB’s Corporate Centre, Lower Broad Street.

An agricultural programme, the Business Boot Camp is an initiative supported by COB in conjunction with the Barbados Entrepreneurship Foundation Inc. (BEF) and largely targets secondary schools.

Commending both COB and the BEF, Mr. Sutherland reminded students, teachers and others gathered that many outstanding Barbadians had benefited from their parents and grandparent’s involvement in agriculture.

While noting that concerns about food security varied from country to country, he said well-known structural weaknesses in Caribbean economies, their predisposition to natural disasters, and high food import bills had all contributed to a renewed vigour and a more favourable attitude towards agriculture in the region.

He stressed the region’s food import bill was estimated at US $4 billion annually, while Barbados’ stood at US $500 million annually.  “What makes it worse is that many of the various produce we import, for example, tomatoes, lettuce, melons, and sweet potatoes, can actually be grown here, at home. Studies have shown that we can become self-sufficient in root crop production,” he pointed out.

Adding that technology was further building out the agricultural sector and could aid the youth, he reiterated the call by Prime Minister Mia Amor Mottley for regional economies to slash the regional food import bill by at least 25 per cent over the next five years.

Minister Sutherland said, however, that while this was a necessary goal, it was important to sustain this over the long run.  Explaining further, he stated: “One way to guarantee this is to get the youth involved in agriculture…. Our children are our future; therefore, any real chance at achieving long-term and sustainable food security depends on the effort made today to help our children embrace agriculture with a similar passion.”

Further noting that the youth must see the value in becoming agripreneurs, he said the responsibility of incentivizing agripreneurship must be shared among several players including Government, the private sector, non-governmental organisations, the investment community and academia.