Youth Participation In Agrofest On The Rise 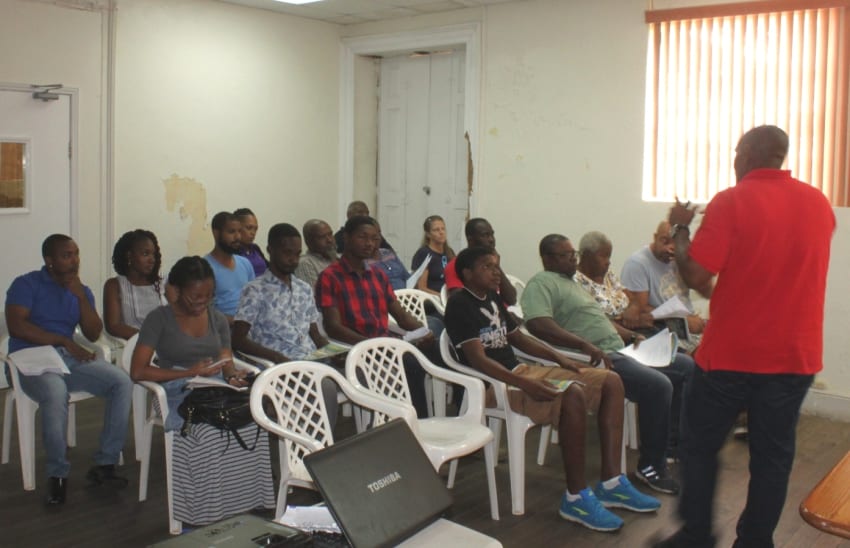 Some of the 30 livestock farmers who attended the Barbados Agricultural Society’s (BAS) workshop at the Grotto last Saturday. (BAS)

Organisers of Agrofest are happy with the increasing interest shown by young people which was demonstrated  as recently as last Saturday during a workshop, hosted by the Barbados Agricultural Society (BAS), for livestock farmers participating in this year’s event.

Several of them were young males, and Coordinator of Agrofest, Theodore Fraser said this was noteworthy, especially in light of this year’s theme: ‘Youth! Farming the Future’.

“I’m glad to see a number of young people in the audience today because our whole focus is on youth in agriculture. We recognise that for agriculture to be sustainable and for it to grow, we need to have young people involved.

“We’ve seen a trend over the last may be four to five years, [and] especially last year where a large number of young people were competing in our livestock competitions and doing extremely well and that was one of the reasons why we thought we would focus on young people…and it is part of our succession planning,” Mr. Fraser noted.

The workshop featured a presentation by John Gardener of Pinnacle Feeds entitled ‘The Barbados Blackbelly Sheep Breed Standard’, which saw participants being briefed on the judging criteria for the competitions involving these animals.

There were also live grooming demonstrations of a cow and a kid conducted by Livestock Committee Chairman, Gerry Thomas, and Extension Officer attached to the BAS in charge of livestock shows at this year’s exhibition, Davon Brome, respectively.

Agrofest will be held from February 23 to 25 in Queens Park.