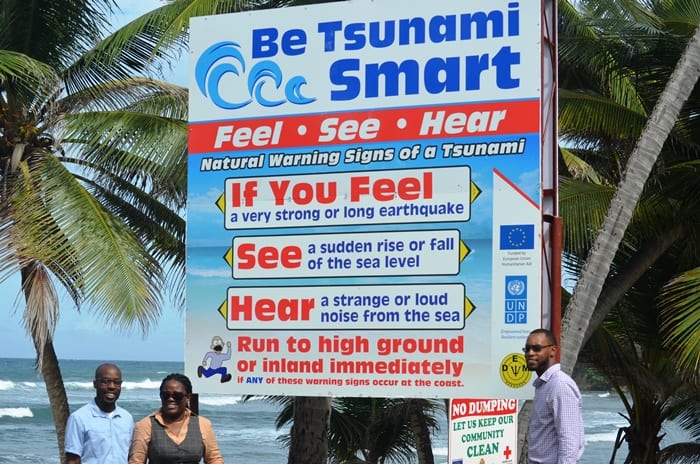 Barbados now has its first Tsunami Smart sign, taking the country a step further in educating residents and creating awareness about the tsunami hazard.

Director of the Department of Emergency Management, Kerry Hinds, joined by her staff, unveiled the sign at Martin’s Bay, St. John, yesterday, and engaged visitors and locals in short information sessions about the hazard.

“The Tsunami Smart sign proposes to increase awareness at all levels among stakeholders and enhance international awareness of the need for resilience and vigilance in the face of large disaster events,” she said.

She also noted that Thursday’s event represented Barbados’ contribution in commemorating the inaugural World Tsunami Awareness Day, which was designated as November 5 annually following a UN Resolution in December 2015.

During a short address to the media, Ms. Hinds urged Barbadians and visitors to know the natural warning signs of tsunamis. She also sought to dispel the notion that tsunamis do not affect Barbados, warning that was not true as the Bridgetown coastline was impacted by one in 1755.

“The threat is real for our coastal communities, and as such, we try to continue to raise the awareness so that people know what can possibly happen,” the Director pointed out.

She explained the sign offered personal preparedness tips to those visiting the nearby Bay Tavern about the natural warning signs of a possible tsunami.

“When you feel a strong earthquake, when you see the sea receding, or when you hear a loud noise, these are the natural warning signs for a possible tsunami so residents and visitors to the area would know to proceed to higher ground,” she noted.

The Director explained Martin’s Bay, along with Sherman’s in St. Lucy, were part of a DIPECHO (Disaster Preparedness European Community Humanitarian Office) project being implemented through the United Nations Development Programme.

Its aim is to build response capacity at local community and public institution levels to face disasters efficiently in the world’s more at-risk regions.

She added that in 2013, Martin’s Bay was part of a community evacuation drill which saw residents and the primary school evacuating the area and moving to higher ground. “We thought it fitting to come back and leave something with the residents of the area,” she explained.

Sherman’s, St. Lucy, will take part in a community evacuation exercise tomorrow, Saturday, November 12, from 2:00 p.m. That exercise will begin at Half Moon Fort Primary School.