Barbados On A Growth Path 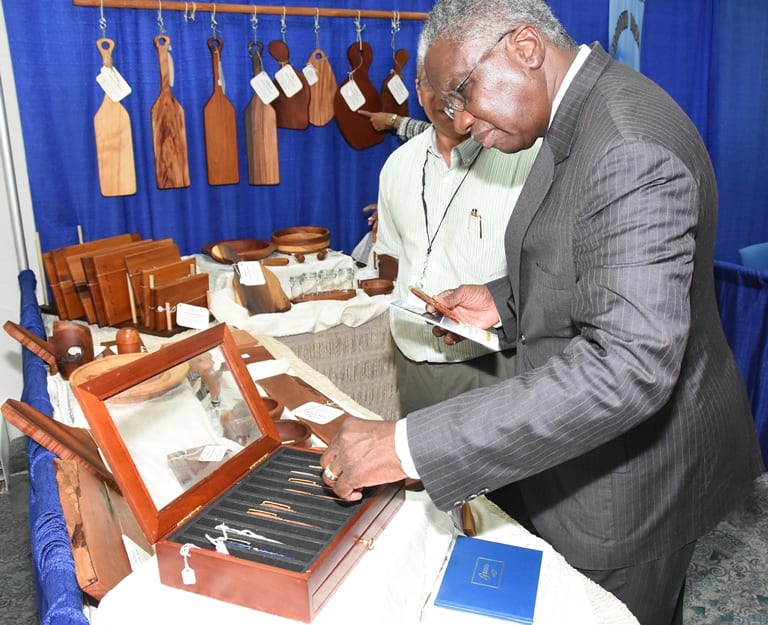 Prime Minister, Freundel Stuart, looking at the exhibits on display at the Barbados Network Consultation 2016 at the Lloyd Erskine Sandiford Centre. (C.Pitt/BGIS)

Prime Minister Freundel Stuart has reiterated that Government is continuing to keep the “ship of state” steady and on a growth path in a still volatile global economic environment.

Mr. Stuart made the comments today while delivering the feature address at the opening of the Barbados Network Consultation 2016 (4th Diaspora Conference) at the Lloyd Erskine Sandiford Centre, under the theme: One Nation, One Family: Celebrating 50 years of Independence – Shaping Global Citizens.

The Prime Minister told his audience: “The challenges of downturn and recession are being courageously and creatively navigated. Our faith in the future, and in the promise of Barbados as a nation, continues to flourish with undiminished vigour.

“Barbados, we contend, is not just an economy, but it is also a society. That perspective continues to inform our policy development focus.”

He said Government’s commitment to offering the highest standards of health and education for Barbadians remained the primary focus. He pointed out that the social development programmes were still the most reliable avenues through which the country sought to respond to the needs of the vulnerable and the challenged.

Mr. Stuart urged those present to take time for deep reflection during the 50th Anniversary of Independence celebrations. “Whatever our political, religious or philosophical persuasions, we need collectively to determine what kind of country we want to build beyond the celebration of our Golden Jubilee,” he contended.

He noted that the Diaspora community was a critical component of Government’s developmental thrust for Barbados.

He pointed out that the community contributed to the society and economy in many ways, and listed them as including building homes; starting businesses; remitting foreign exchange to relatives; promoting niche products and cultural offerings in their communities; and making cash and in-kind donations to some of our institutions here.

The Prime Minister said members of the diaspora must seek at all times to reflect the positive habits and values that had been traditionally associated with Barbados, among which are respect for other persons; thrift in the management of personal economic affairs; and a thirst for education and self-advancement.

“We recognise that progress and modernisation have affected some of these habits and values, but for the most part, they are alive and well even today, by comparison with many other countries,” he stated.

He said the Diaspora Conference, which started six years ago, has been innovative and propelling, adding that reports on it had been positive.

“They all lead me to conclude that we have achieved a great measure of success in our efforts to make Barbadians based abroad feel a sense of belonging and participation in all that Barbados strives to be as a nation,” Mr. Stuart opined.