Barbados Remains Committed To Working With US 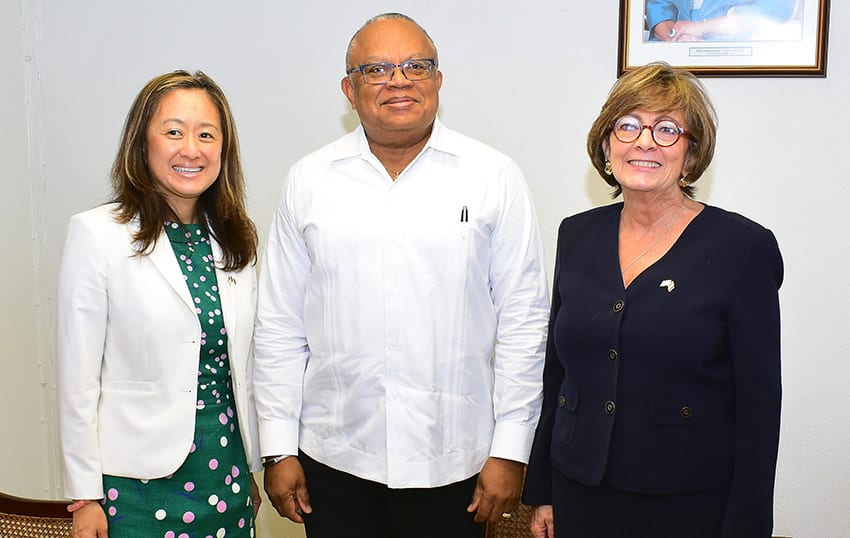 Barbados remains committed to enhancing its relationship with the United States (US).

Minister of Foreign Affairs and Foreign Trade, Senator Dr. Jerome Walcott, made this clear during a recent courtesy call by the US Department of State’s Principal Deputy Assistant Secretary for the Western Hemisphere Affairs, Julie Chung.

She was accompanied by US Ambassador to Barbados, Linda Taglialatela; Director of the Office of Caribbean Affairs, Ms Katherine Dueholm and First Secretary of the US Embassy, Rachel Myers.  Officials from the Ministry of Foreign Affairs were also in attendance.

Minister Walcott stated that the US is an important tourist source market, trade partner and home to a growing Barbadian diaspora.  He acknowledged the ongoing assistance by the US through the Caribbean Basin Security Initiative (CBSI), which he described as one of the most visible and productive areas of cooperation between the US and the region

Ms. Chung disclosed plans to revive US engagement with the region through Caribbean 2020, a multi-year strategy to increase security, prosperity, education, energy, diplomacy and the well-being of the people of the US and the Caribbean.  She also stressed the US’ commitment to the CBSI, disaster mitigation and management.

Minister Walcott welcomed this news, noting that there was concern about the pace of implementation as President Barack Obama signed into law HR 4939, entitled “The United States-Caribbean Strategic Engagement Act of 2016”, on December 16, 2017.

Ms. Chung explained that the US values its relationship with the Caribbean. “I know there may be a perception of our absence, but we have been looking at ourselves, reflecting on this and there is a commitment to that.  The US is here, we are not leaving, and we are not going anywhere.”

During the courtesy call, the officials also engaged in frank discussion on a number of political and diplomatic matters. Minister Walcott reiterated Barbados’ stance for dialogue and fresh elections in Venezuela to end the crisis in that country.

“Our position is clear; we are friends of all, satellites of none.  We believe in non-intervention and respect for human rights.  There is need for dialogue as is being done in Haiti to avoid escalating tensions. We are against armed intervention because of the humanitarian crisis.  We are speaking about fresh elections…. It should not be seen as for, or against, at this stage,” he said.

Ms. Chung called on Barbados and CARICOM to rethink their position on Venezuela and to look objectively at all factors.  She expressed concern about regional security resulting from the crisis in the South American nation.

“It affects the whole region…. Barbados has a long history of democracy and should speak up at CARICOM.  We urge you to do more.  This is a time for choice; neutrality may be turning a blind eye to the humanitarian crisis…. It is not a time for dialogue; we see it as a delay tactic.  It is not a neutral matter,” Ms Chung stated.

Minister Walcott said: “While we differ in some things, we must know that happens amongst friends.  The best of friendships have differences, but we must proceed with diplomacy and dialogue.”