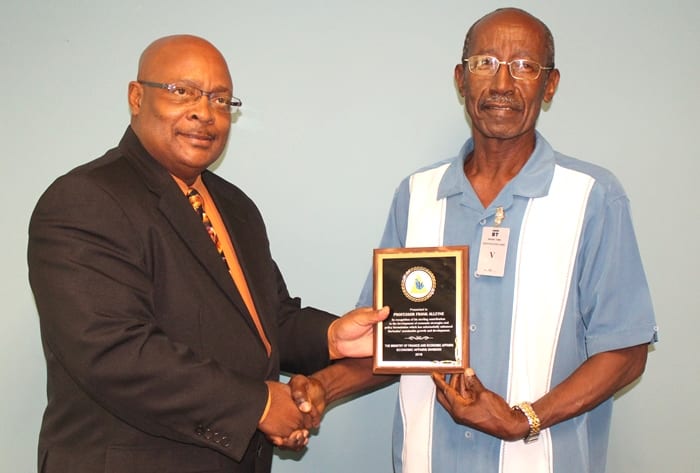 Parliamentary Secretary in the Ministry of Finance and Economic Affairs, Senator Jepter Ince (left) presenting Sir Frank Alleyne with a plaque for his contribution to Barbados’ sustainable economic growth and development at the Economic Affairs Division’s 10th Lecture-Seminar Series at the Baobab Tower today. (GP)

Barbados must find a way to build a more resilient economy, so its overall development and the standard of living of its citizens are not at the mercy of the international agencies, or the economic performance of countries.

This view was expressed by Parliamentary Secretary in the Ministry of Finance and Economic Affairs, Senator Jepter Ince, today at the Economic Affairs Division’s 10th Lecture-Seminar Series at the Baobab Tower.

Senator Ince said Government was continuing to restructure and diversify the economy, but as a small open developing country, Barbados was vulnerable to external shocks, as the recent global financial crisis had shown.

“On the social side, in terms of health care, there are still challenges with respect to chronic non-communicable diseases. Though we have made strides in the past 50 years, improving the quantity and quality of housing, there were still pockets of unsatisfactory living conditions among the more vulnerable sections of the population.

“Though these challenges may appear daunting, Government remains resolute in its objective to managing an economy and country that is economically viable, socially balanced and environmentally sound, characterised by good governance.  We are a strong and resilient people and we have demonstrated this time and time again; we are also proven craftsmen of our fate.  What is required now is to strategically plan for the future.”

He opined that there was a need to continue creating a sophisticated entrepreneurial class that would help to transform the Barbados economy in the future.

He explained that there was a broad and growing consensus that structural reforms could lead to improvements in resource allocation and productivity, and boost growth.

The Parliamentary Secretary said Barbadians had a lot to be thankful for, pointing out that the economy had been transformed and the wealth and standard of living of the population had improved.

He added that the social safety system takes care of the less fortunate and most vulnerable in society and the country’s poverty and crime rates were among the lowest in the world.