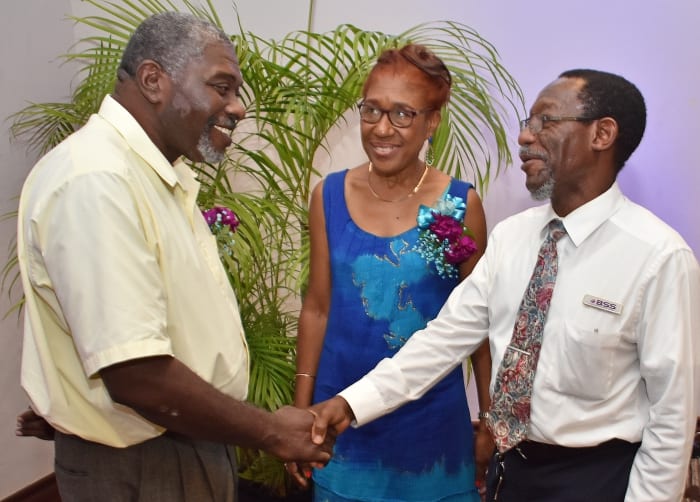 The outstanding work and commitment of retired Deputy Director of the Barbados Statistical Service (BSS), Trevor David and Senior Statistician, Denise Haddock, were recognised recently during a retirement function at the Accra Beach Hotel.

They both spent over 80 years working in the public service, with most of the time at the BSS, where they rose up the ranks periodically.

And, acting Director of the BSS, Aubrey Browne, showered praise on the retirees, saying, “the collective working experiences of both Denise and Trevor would not be easy for the Department to replace over the short term. Therefore, their departure has left a void within our organisation”.

Mr. Browne said Mr. David’s tremendous knowledge about the public service was an asset to the BSS. “He often provided guidance and encouragement to staff members on an individual basis. His advice and counsel were of great value to me on many occasions, especially at times when our annual Estimates were being reviewed,” he stated.

He added that for most of Ms. Haddock’s statistical career, she worked in the area of National Accounts. “Her wealth of experience in this area, especially in the recent development of our constant price series of GDP estimates, both quarterly and annual, will not be easy to replace. We will miss her for her knowledge and experience, which she freely shared with other staff,” he noted.

Mr. David started his career in the public service as a Clerical Officer at the Ministry of Housing in June 1976, and joined the BSS on January 14, 1991, as a Statistician II. From February 2009, he was entrusted with the temporary post of Census Coordinator for the 2010 Population and Housing Census. When the post of Deputy Director became vacant in November 2010, he was promoted and functioned in that capacity until his retirement.

Ms. Haddock, on the other hand, started her career in the public service as a Clerical Officer in June 1977. She was appointed a Statistical Assistant in August 1985, and promoted to Statistician II in 2001 and Statistician I in 2003. She was later appointed in a Senior Statistician post and acted in this role until retirement in December 2017.