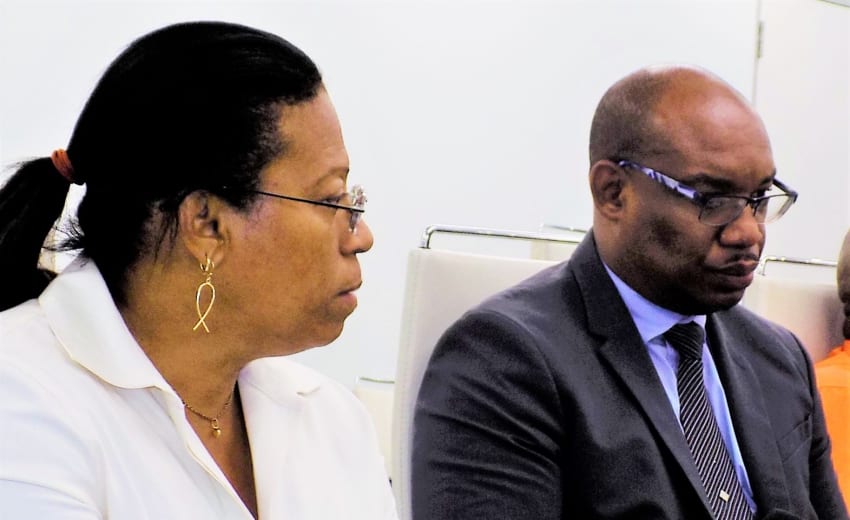 Head of the Barbados Water Authority’s (BWA) Waste Water Division (WWD), Patricia Inniss, has given the assurance that crews are working assiduously to reduce the impact of sewage overflows affecting residents and businesses on the south coast.

She was speaking at a wide-ranging press conference at the BWA’s headquarters in The Pine, St. Michael, yesterday.

Acknowledging public concern, Ms. Inniss said staff were on duty 24 hours per day monitoring the system and carrying out remedial work. She made reference to the screw lift pump which failed on Wednesday night, which saw overflows appearing at Rockley Beach, noting that matter was being dealt with by a team of engineers and private consultants.

“We have had [an issue] with the screw lift pump. We have worked to balance the situation with the auxiliary pumps. We have problems presently on the south coast and we’re trying to return some level of normality as quickly as possible,” Ms. Inniss stated.

She added that teams were also addressing an issue at the Bay Street lift station. According to her, “the Ministry of Health would be monitoring to make sure the area is sanitised and returned to normal” upon completion of that work.

Ms. Inniss went on to disclose that the BWA was in contact with a number of those affected by the sewerage issue, stating: “We are in daily communication with at least 70 businesses, and our last reports from the FTC [Fair Trading Commission] can attest to that, who are immediately affected by the overflows either in the streets or on their premises.  I commend the majority of them who are working with the Barbados Water Authority on a daily basis.”

The Head of the Waste Water Division, however, pointed out that the issue has been exacerbated by the infiltration of debris, while suggesting that illegal connections were a contributing factor. “There are storm drains connected to intercept chambers, i.e. going into the sewers. In all cases we cap those, we inform the businesses that the problem exists.

“Our concern is that even with our present situation, this is not in the form of an excuse but this is reality, the amount of debris coming into the plant, according to our operators and cleaners, has not been reduced,” Ms. Inniss said, adding that they have increased the number of daily cleanings to combat this problem.

She further revealed that they continued to remove rags caught in the network’s strainers daily, stating: “the quantity of rags that are caught in the strainers of the pumps has not been reduced.”

The BWA official also called on businesses, mainly food establishments, to be mindful of their disposal of fats, oils and grease, warning that improper practices were “destroying the network”.

“It enters the network and becomes a cement block and human beings have to go down there …and literally chip away with a chisel to get these things out,” Ms. Inniss explained, noting that public education campaigns and enforcement of the relevant legislation would be critical to curb this situation.