CBTF Model Exported To Other Countries 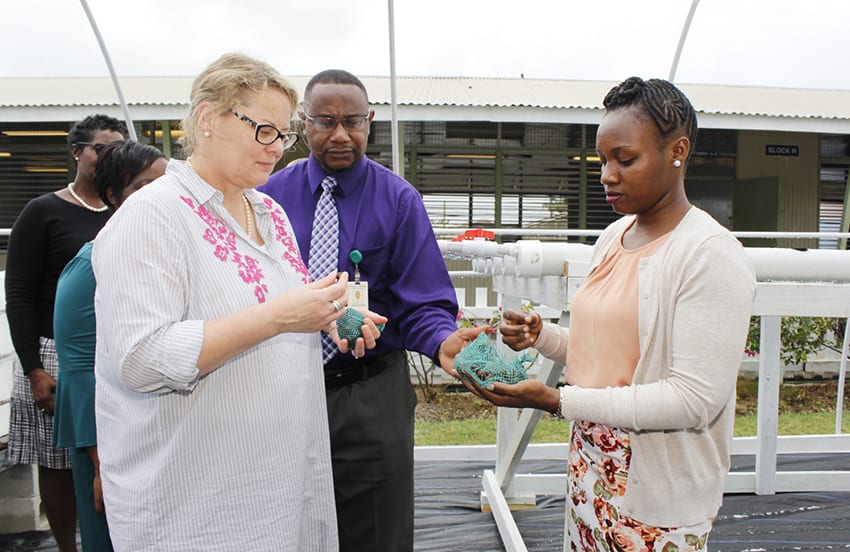 Science teacher at the Daryll Jordan Secondary School, Akilah Brooks (right) showing Education Lead Specialist with the IDB, Sabine Rieble-Aubourg and Acting Director of the Skills for the Future Programme, Junior Burgess some of the produce from the school’s agricultural programme. (GP)

The Competency-Based Training Fund (CBTF) dubbed the flagship of the Skills for the Future (SFTF) Program has been hailed as a success by the Inter-American Development Bank (IDB).

So much so that Education Lead Specialist with the IDB, Sabine Rieble-Aubourg, disclosed that the model was being replicated in other Caribbean and Latin American countries.

She was speaking this morning at the closing session of the IDB’s most recent Administrative Mission to Barbados at the Ministry of Education, Technological and Vocational Training.

“The CBTF is the component that really put Barbados on the map.  It put the Ministry of Education on the shortlist at the IDB’s Superheroes of Development Contest held in Washington DC in October, this year, and Barbados was one of the finalists.  It was a very big moment. It has been a project of continuous improvement.  It has been exported to other countries like the Dominican Republic, Panama and Trinidad and Tobago. So really, Barbados is here at the forefront,” she stated.

Implemented in 2013, the CBTF is a Government of Barbados/Inter-American Development Bank initiative designed to better equip Barbadian workers with the skills and competencies they need to excel in a rapidly changing world.

The Fund represents Component I of the Skills for the Future Program, and awards grants of up to BDS$500,000 per proposal to partnerships between employers and training providers to implement two-year competency-based training programmes, leading to certification by the Technical and Vocational Education and Training (TVET) Council.

So far, approximately 2,300 persons have been certified with Caribbean Vocational Qualifications through these partnerships and another 500 are expected to receive their certification by the end of May 2019. There are 30 partnerships funded by the CBTF and of those, 19 have been completed, while 11 are still ongoing.

The Skills for the Future Program, which was implemented in 2012, has a fund of BDS $40 million. Ms. Rieble-Aubourg explained that $16 million, or 79 per cent of the loan, had been disbursed so far, with another $4 million to be disbursed over the course of next year.  The loan is expected to come to an end in October/November, 2019.

The Education Lead Specialist pointed out, however, that the sustainability of the CBTF needs to be actioned by the Employment Training Fund (ETF) after the loan ends.  She added that while the ETF had taken on some of the characteristics of the CBTF, it must have the appropriate funding to carry on what has already been started.