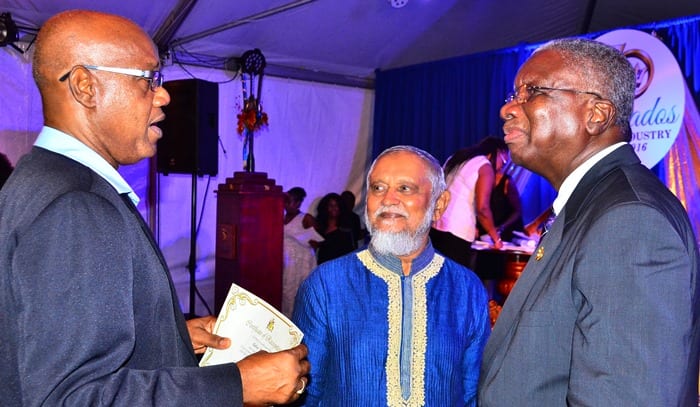 Government is committed to creating an inclusive Barbados where people can realise their aspirations.

Prime Minister Freundel Stuart expressed this commitment last night after the Director of the Sir Arthur Lewis Institute of Social and Economic Studies (SALISES), Dr. Don Marshall, presented him with the Barbados At 50: The National Values Assessment 2016 Report.

In addition to the hand-over of the report, several persons received certificates of appreciation for their hard work during the 50th Anniversary of Independence celebrations last year.

Mr. Stuart said the questions he posed in 2016 at the launch of the anniversary celebrations as to which features of Barbadian life should be retained, reclaimed or discarded quickly, formed the basis for the important study.

“I detect that there is some uncertainty in Barbados today as to where we are and what it is we believe. I agree the Barbados of 50 years ago is not going to come back ever; too much has happened over the last 50 years for us to reconstruct that Barbados. Our material foundations have changed and therefore we are not casting a nostalgic glance into the past and trying to reconstruct the old Barbados because again there was not everything good about the old Barbados either.

“But what we want to do is create a relevant Barbados that is inclusive, and a Barbados in which every man, woman, and child can feel that he or she has a chance to make what he or she believes felt in the society…,” he stated.

Mr. Stuart stressed that Barbados had changed much over the past 50 years, and he was therefore not surprised to hear Dr. Marshall’s comments that citizens had a tendency towards an American values system.

He underscored the importance of Barbadians determining what kind of nation they wanted. He pointed out that a society was not held together by the material acquisitions which people struggled so feverishly to possess but by shared values.

The Prime Minister said the study was commissioned, not for academic purposes, but for policy-making and charting a future for the country. He expressed profound gratitude to SALISES for the work done, saying that with the expected discussions, the needed path should be found.