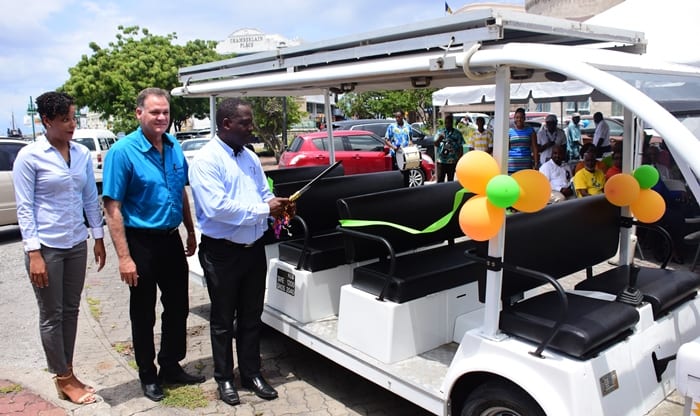 He made this assertion while pointing out that continuous use of fossil fuels was not sustainable at the official launch of the Small Business Association’s Solar Transport Project in National Heroes Square, The City, last Friday.

The Minister of Commerce told his audience that the Government, in recent years, had started to roll out an “eco system including a legislative framework that ensures that we are able to identify, grow and develop the renewable energy sector and to remove our dependency on fossil fuels in Barbados”.

Mr. Inniss contended that despite the naysayers, there had been new jobs created in the renewable energy sector in the design, implementation, maintenance, and management of the projects.

In fact, the Minister disclosed that the Government was on a trajectory to become almost 100 per cent efficient in renewable energy by 2045.

“I think this little island [Barbados] has a lot that we can showcase to the world when it comes to renewable energy.  We did it in the 1970’s and I want to thank James Husbands and those who went before with the solar hot water system, and I don’t think that we celebrate individual like these.  Additionally, Senator John Watson and his team also blazed a trail with respect to the [development] of the industries,” he stated.

The Minister also alluded to the Barbados Investment and Development Corporation’s (BIDC) plan to lease 421,000 square feet of roof space to generate 8.5 million kilowatt hours power system with a total capacity of 5,529 kilowatts.

“I want to commend the CEO and the board of the BIDC for being actively involved in making use of this space that they have, to help us with our thrust towards renewable energy going forward,” Mr. Inniss added.