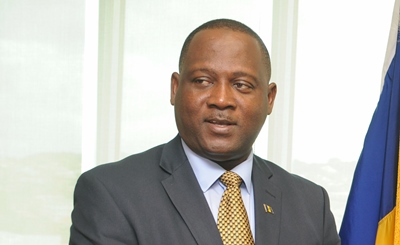 During a courtesy call at his Reef Road office from recently-appointed President of the Barbados International Business Association (BIBA), Gregory McConney, Mr. Inniss stated that he would like BIBA and the Ministry of International Business to partner on such a programme, as more needed to be done to educate individuals on the impact and potential of the sector.

Noting that in the past such campaigns were utilised by the tourism industry, he said the same thing had to be done for the IB sector, “where we can set a goal for the next two, three years, where everybody’s talking about international business”.

“International business still seems like an elusive thing with [with the perception that it is] a handful of rich guys, expats, out there doing their own thing,” he lamented.

Mr. McConney agreed, and noted that that was the general perception he experienced when interacting with key agencies. He stated that he was keen on working with the Ministry in the hopes of taking the sector forward but there were still some areas that needed addressing.

Additionally, BIBA’s President disclosed that during his tenure, he hoped to hold working group sessions with key players in the sector. These included the Barbados Revenue Authority, the Corporate Affairs and Intellectual Property Office, the Ministry of International Business and the Immigration Department.