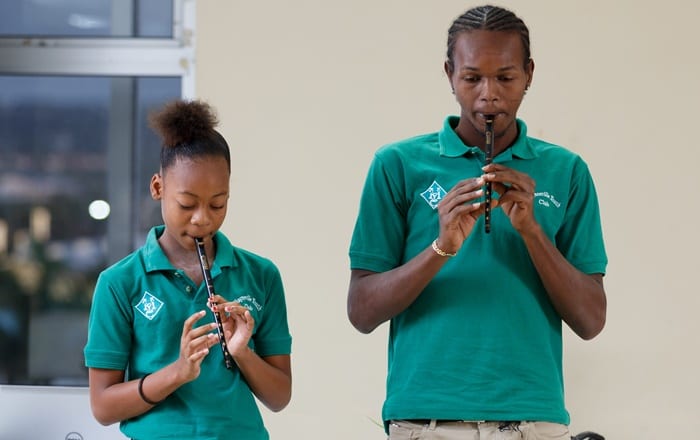 What started as one man’s burning desire to revive a number of dying art forms across Barbados has given birth to a new generation of fire-eaters, limbo dancers and penny whistle players.

This follows the culmination of a series of workshops in the three disciplines arranged by the Human Resource Development Strategy of the Ministry of Labour and Ruk-A-Tuk Inc. to train persons in art forms that are deemed unique to the cultural landscape of Barbados.

The training sessions were officially launched in January this year, and at that event, Managing Director of Ruk-A-Tuk Inc, and the brainchild behind the initiative, Wayne ‘Poonka’ Willock, explained why he deemed the project a matter of urgency.

“We want to be sure that when we go, we leave the ability and the legacy of professionalism in these areas, to carry on the institution of cultural arts. The void has to be filled even before we part, and these forms of indigenous entertainment must survive the long haul,” he affirmed.

Mr. Willock issued a spirited challenge to the pool of young applicants gathered, and emphasised that the art forms in focus were “specialist areas”, requiring a lot of discipline and hard work to achieve a high standard. This, he suggested, was not the type of rigour that some younger practitioners might be willing to submit themselves to.

Over the course of the 10-week training workshops, the students worked towards receiving the cultural baton from penny whistle expert, Mr. Willock; renowned fire eater, Winston ‘Cassius Clay’ Yearwood; and limbo queen, Cheryl Grazette, and their journey to fulfilling a new artistic legacy. 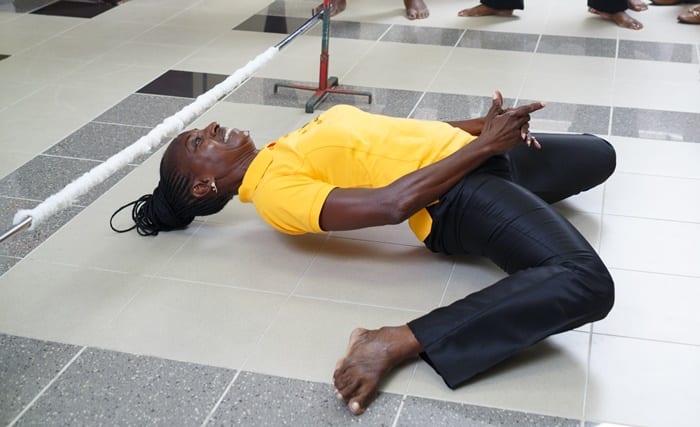 Limbo dancing tutor, Cheryl Grazette, gave students something to aspire to, when she wowed them by going under the lowest bar at the closing ceremony of the Ruk-A-Tuk Inc. Cultural Arts Workshops. (Photo: H. Reece)

Leading the charge for upcoming artisans who have embraced the full weight of perfecting their craft, fire-eating student, Margaret Manning, rose to the occasion, to prove that she was willing to conquer her fears and do whatever was necessary to hone her new skill.

In an interview with the Barbados Government Information Service at Barbados Industries in Wildey St. Michael, the aspiring entertainer explained to the BGIS that while one can learn the basics, “the flare must come from within”.

“Fire eating is something that I wanted to do for a very long time but there was no outlet for it that I could find… When I saw the class in the paper, it was a no-brainer for me and I immediately called…

“I got opposition from my family but I told them don’t think negatively… This is a new experience…and when you see it you say this is amazing. How can a person do this? I want to do this,” she enthused.

Facing similar opposition was penny whistle student, Shaniqua Smith, who admitted that her passion and obvious fascination with the instrument started to “drive her parents crazy”, due to her incessant practice sessions at home.

“My parents are happy for me now because they told me that if I continue to do it, I can get far in life with it,” she said proudly.

Like a thorn amongst roses, stilt walker Gordon Ashby stood out as the lone male limbo-dancing student in an art form that is now dominated by females.

When asked what compelled him to get involved in limbo, the vivacious 56-year-old said: “I am a stilt walker generally. I’ve been high and now I want to go low.” 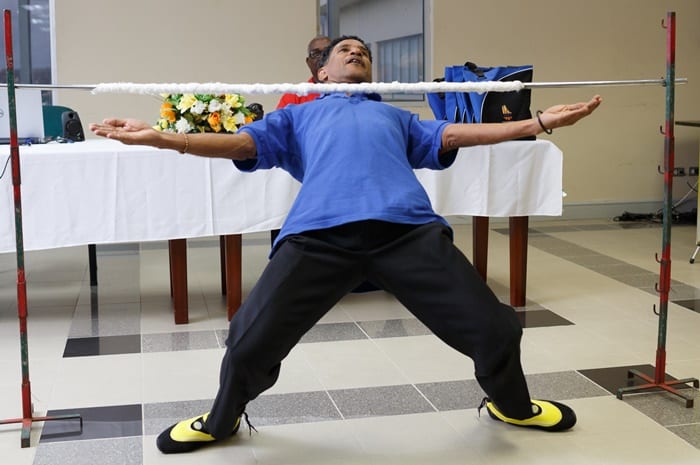 Limbo dancing student, Gordon Ashby, shows why he copped the award for Most Improved Student at the closing ceremony of the Ruk-A-Tuk Inc. Cultural Arts Workshops. (Photo: H.Reece)

Seizing the opportunity to achieve his new goal, Mr. Ashby quickly adapted to the training techniques and gave kudos to his tutor Cheryl Grazette, whom he described as the “limbo queen of the world.”

“You have to learn the techniques and you have to get the bottom of your feet hard… It develops a lot of muscles that I never used before and it’s excellent.”

“I’m [tall] so my center of gravity is higher… Despite going under the bar there is also the dancing aspect. I had to dance like a man rather than a girl and put my own little flare in it; but it’s a lot of fun,” he said with a laugh.

With a final word of encouragement to his male counterparts, the student stressed that more male limbo-dancers were needed. He explained that historically, there were more males than females practising the art, now mostly females were carrying on the skill.

With workshops such as the one conducted by the HRDS, Mr. Ashby said he hoped to see the restoration of balance once again in this cultural field.

It is hoped that the training in the three disciplines will go a long way towards extending the life of the art forms and cement their place in the cultural annals of Barbados.