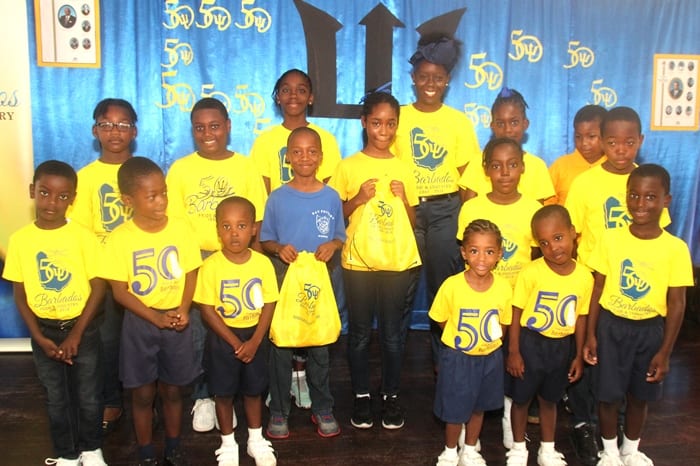 Schools across Barbados are expected to be adorned in Barbados’ national colours and symbols as primary and secondary school students compete in the Flags and Fifties competition.

Hosted by the 50th Anniversary of Independence Secretariat, the competition was launched at all primary and secondary schools across the island this morning, in an effort to encourage persons to “dress the nation” in the national colours.

Speaking during the launch of the competition at the Bay Primary School, Web Content Officer at the Secretariat, Sharifa Medford, explained that the competition was designed to assist with the dressing up of schools across the island using a template of the National Flag and the 50th anniversary logo for students to colour.

She added that in addition to decorating schools with the coloured symbols, students are also being encouraged to create a display at their schools using the flags and 50s symbols.

“We decided to have a competition so schools could win good prizes,” Ms. Medford told the students, who were decked out in their Independence colours.

The students were also urged to take their creations outside of the classroom, and travel with them to the various events being held across the country to celebrate the island’s jubilee anniversary.

“When you go to activities take along your flag and 50s…wave them high and proud to show that you are a proud Barbadian and that you are excited to be a part of the 50th anniversary of Independence celebrations,” Ms. Medford said.

The winning primary and secondary school will each receive a prize and have an opportunity to select a student to lead the nation in reciting the National Pledge at the Historic Garrison Savannah on Wednesday, November 30, during the 50th Anniversary Independence Parade.

“That is a big deal. You [will be] standing up there in front of all those people from Barbados, from across the region, from all over the world that may come to our Independence celebrations, reciting the National Pledge,” the Web Content Officer told the students.

In addition, schools with notable displays will also be invited to select students to participate in the reveal of the National Monument at the Historic Garrison Savannah on Tuesday, November 29.

Meanwhile, prizes will also be awarded for the second and third place winners. Participating schools are required to submit a photo of the completed display via email to secretariat50@barbados.gov.bb, by 3:00 p.m. on Friday, November 4.

Former student of Bay Primary School, Commander David Dowridge, told students that that they were the ones that would prepare Barbados for the next 50 years.

“Therefore, you have to be very responsible. Dress well and conduct yourselves mannerly, and be involved in sports. That’s what is required for the next 50 years,” he advised.

Meanwhile, businesses, homeowners, motorists and the general public, were also encouraged to join the effort to cover Barbados with a sea of aquamarine, gold and black in celebration of its 50th anniversary.