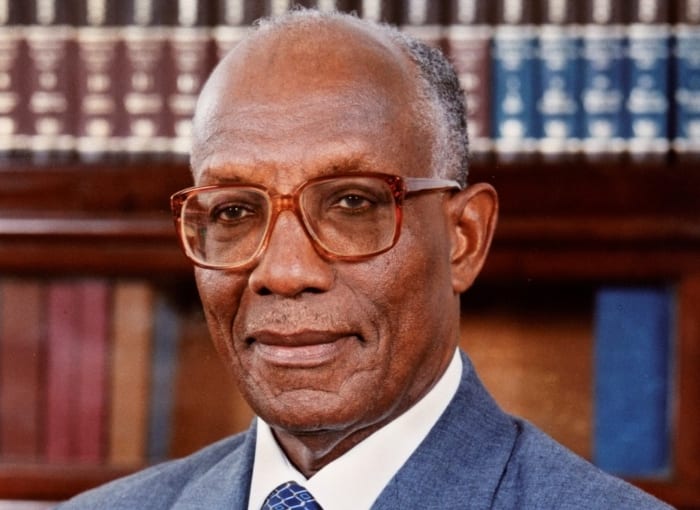 Prime Minister Freundel Stuart has described former Governor General, the late Sir Clifford Straughn Husbands, as “an asset to the public life of Barbados”, who rendered “impressive service” to the country.

Mr. Stuart made the comments today while extending heartfelt condolences to Sir Clifford’s bereaved family on behalf of the Government and people of Barbados.

He added that it seemed that wherever Sir Clifford was serving, there was a spirit of contentment. “Whatever he was called upon to do, he did to the best of his ability; as Director of Public Prosecutions, as Judge of the High Court, as Justice of Appeal, or as Governor General.

“I think Barbadians can learn much from the example which he set in all four of those capacities and also in his personal habits – the way he carried himself, the way he spoke and the standards he set for himself – are all aspects of his life from which we as a nation can learn.”

Mr. Stuart said he had known Sir Clifford for a number of years, having had to relate to him as a High Court Judge, Appellate Judge and Governor General of Barbados. “In all three of those capacities, I was impressed by his personal dignity, his impatience with sloppiness of any kind and his enviable courtesy.

“As a High Court Judge, his court was always orderly and he commanded the respect of attorneys-at-law across the entire Bar. To appear before him was always a privilege because his sartorial elegance and his judicial sharpness were always matters that caught the attention,” he stated.

The Prime Minister noted that Sir Clifford would go down as the longest serving Governor General of Barbados, having been appointed after the death of Dame Nita Barrow in 1995, and serving until 2011.

“He discharged the functions of the office of Governor General again with that dignity that came so natural to him. He embodied all of those attributes as Governor General that endeared him to the population and made him a public figure whose standards could be studied…for emulation,” he opined.

He pursued studies in Law at the Middle Temple, Inns of Court in the UK and was called to the Bar in 1952. Between 1954 and 1960, Sir Clifford held various legal appointments in Grenada, Antigua, Montserrat, St. Kitts-Nevis and Anguilla. He was appointed as DPP in Barbados in 1967 and elevated to the dignity of Queen’s Counsel in 1968.

Sir Clifford was appointed as a Judge of the Supreme Court in 1976, and was promoted in 1991 as a Justice of Appeal, completing his tenure in 1996. He also acted as Chief Justice on several occasions and as Governor General prior to acceding to the later position.

In recognition of his long and outstanding Legal and Judicial Service to Barbados, Sir Clifford was awarded the Gold Crown of Merit in 1986, made a Companion of Honour in 1989 and a Knight of St. Andrew in 1995. He was installed as Governor General on June 1, 1996, and retired from office on October 31, 2011.