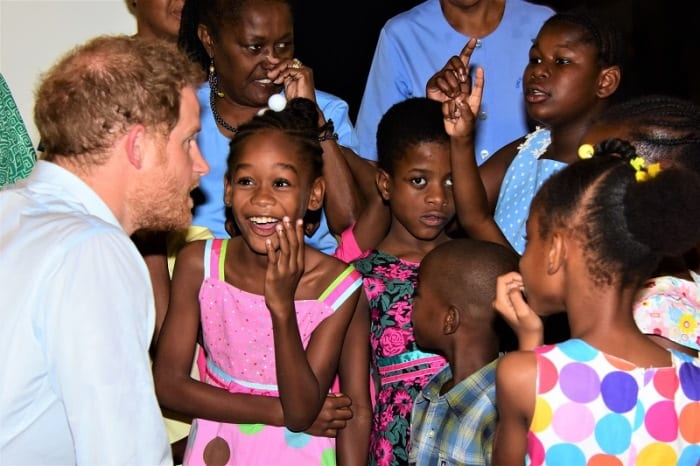 His Royal Highness (HRH) Prince Henry of Wales chatting with some children during his visit to the Nightingale Children’s Village yesterday. (C.Pitt/BGIS)

His chance to play on Tuesday was spoiled by the heavy rainfall affecting the island, when he officially opened Carole’s Cottage and The McManus and Ellen Horejsi Centre at Nightingale Children’s Village, Nightingale Gardens, Black Rock, St. Michael.

However, Minister of Culture, Sports and Youth, Stephen Lashley, presented HRH, familiarly known as Prince Harry, with a carved mahogany sculpture of the road tennis racket.

Minister Lashley explained that road tennis “is a wonderful hybrid of lawn and table tennis” and is known as the “poor man’s tennis”.

He said road tennis was enjoyed by many people and is a great source of exercise for able bodied and special needs groups. “It is easy to set up, affordable and can be played in and outdoors,” he remarked.

Minister Lashley added that Government was seeking to expand the sport internationally, with the goal of it being included in the Commonwealth and Olympic Games.

He pointed out that Barbados is highly diverse in the sporting and cultural arenas, and had produced outstanding international personalities such as the Right Excellent Sir Garfield Sobers and Rihanna.