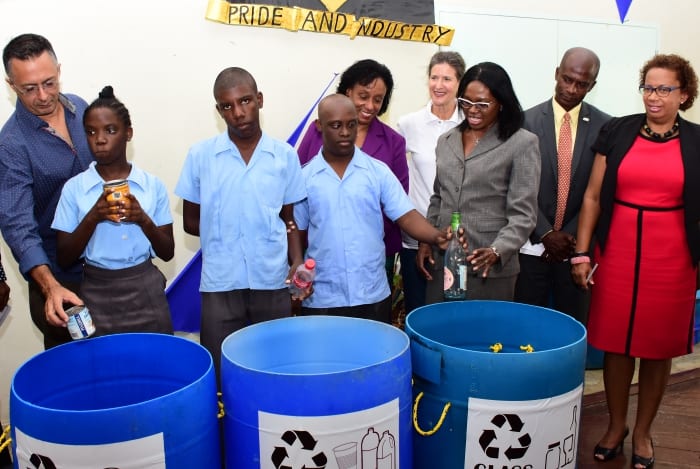 Registrar of the Supreme Court, Barbara Cooke-Alleyne, (third from right) showing students how to separate the waste as staff of the school and other officials look on. (C.Pitt/BGIS)

The Ann Hill School has joined the recycling drive in Barbados.

This comes after it was selected as the pilot school for the launch of the Bright Spot project hosted by the Caribbean Leadership Development Network (CLDN) Barbados Chapter.

Speaking during the launch yesterday, Registrar of the Supreme Court and alumni of the Network, Barbara Cooke-Alleyne, said such initiatives were very important.

“We can’t hide and say we don’t have a problem with waste and collection, so it is pretty important that everyone gets on board and teach about being green,” she said.

She explained the purpose of the CLDN programme was to develop leadership in Caribbean integration.

“We meet together with other people from other countries similar to ourselves and we discuss and learn how to be better leaders, not only for our country, but for the region as well. We are now giving back what we learnt by having this project called the Bright Spot,” she said.

Mrs. Cooke-Alleyne added that sometimes people forgot that persons who are challenged live in Barbados and contributed to the island’s waste and must, therefore, learn to recycle also.

“So, we started with them and will go further so that all would be involved,” she stated, noting the project would be extended to other schools.

The Registrar said it was believed that the project would have a major impact as waste disposal was a problem for Barbados and everyone needed to be on board.

Mrs. Cooke-Alleyne further noted that the process should start with the youth because if they learnt the importance of separating waste at source, it would make a difference. 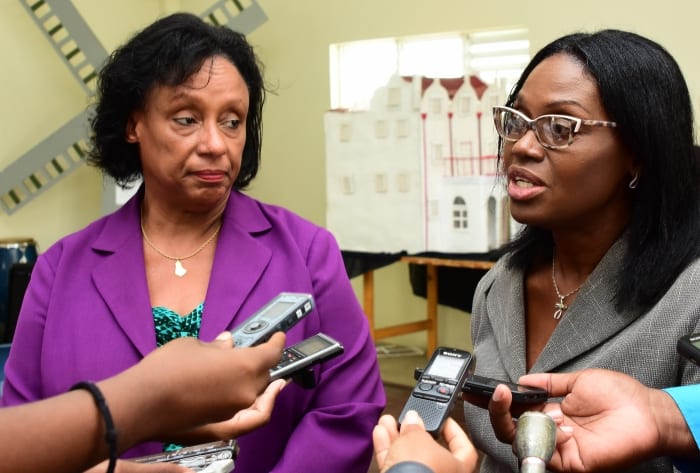 Registrar of the Supreme Court and alumni of the Caribbean Leadership Development Network Barbados Chapter, Barbara Cooke-Alleyne (right) and Permanent Secretary in the Ministry of Transport, Simone Rudder, speaking to the media following the launch of the Bright Spot project at The Ann Hill School. (C.Pitt/BGIS)

She was supported in this view by member of the CLDN Barbados Chapter, Permanent Secretary in the Ministry of Transport, Simone Rudder, who also noted that by starting with the youth, the students would teach their parents about recycling.

This, Ms. Rudder said, would emphasise the need for persons to separate their garbage at source and ensure that all of the waste items were not placed in the garbage and ultimately end up in the landfill.

Under the project, the CLDN will seek to supply the Ann Hill School with the facilities to establish their recycling project and get their composting going.

Lieutenant Commander, Brian Roberts, said the school would receive assistance in constructing the storage area, the development of an agricultural programme, composting and training sessions for students, staff and members of the Parent Teachers’ Association.

Meanwhile, Senior Education Officer in the Ministry of Education, Kay Sargeant, assured those present of the Ministry’s support for the programme and any other initiatives that would help the children understand and contribute towards making Barbados better.

The CLDN programme is a one-year programme conducted through virtual, online and face-to-face discussions. To date, over 40 Barbadian public servants have benefitted from the training.