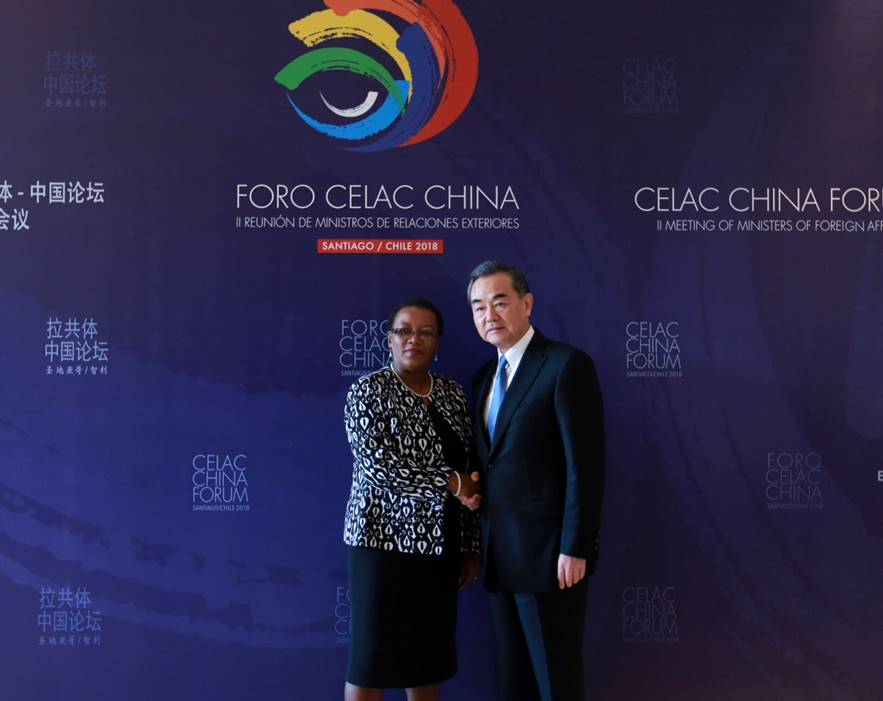 Minister of Foreign Affairs and Foreign Trade, Senator Maxine McClean greets her Chinese counterpart, Wang Yi, at the second meeting of the Forum of Foreign Ministers of China and the Community of Latin American and Caribbean States (CELAC) in Santiago, Chile. (GP)

There is a commitment from the Caribbean and Latin America to deepen the existing relationship with China.

This was the consensus adopted by those countries represented at the Second Meeting of the Forum of Foreign Ministers of China and the Community of Latin American and Caribbean States (CELAC)and China in Santiago, Chile.

The Forum adopted a declaration and a plan of action which sets out the activities that the parties will undertake over the three-year period 2019 to 2021.

Minister of Foreign Affairs and Foreign Trade, Senator Maxine McClean, led the Barbados delegation. During her address at the plenary session, Senator McClean emphasised the importance of climate change, renewable energy and regional transportation to the countries of the Caribbean Community and outlined the special circumstances of Small Island Developing States. The Minister also indicated that Caribbean regional institutions should take full part in the process.

Caribbean Foreign Ministers also met with the Chinese Foreign Minister, Wang Yi, in a special bilateral meeting which reviewed the state of cooperation between China and the Caribbean and agreed on certain key activities to be jointly implemented.

The Chinese Foreign Minister extended an invitation to the countries present to participate in the upcoming China International Export Exhibition, scheduled to take place in Shanghai, China, in November this year. The Exhibition is a forum for China’s trade partners, including Barbados, to promote their products and services to the Chinese market and is part of China’s plan to diversify its economy from one that is investment-led to one that is more consumer-focused.

China has become one of the most important trade and investment partners for the countries of Latin America and the Caribbean. Recent studies cited by the United Nations Economic Commission for Latin America and the Caribbean indicated that China invested in excess of US$141 billion dollars during the period 2005 to 2016 and estimate the value of trade between the two sides at US$266 billion dollars in 2017.