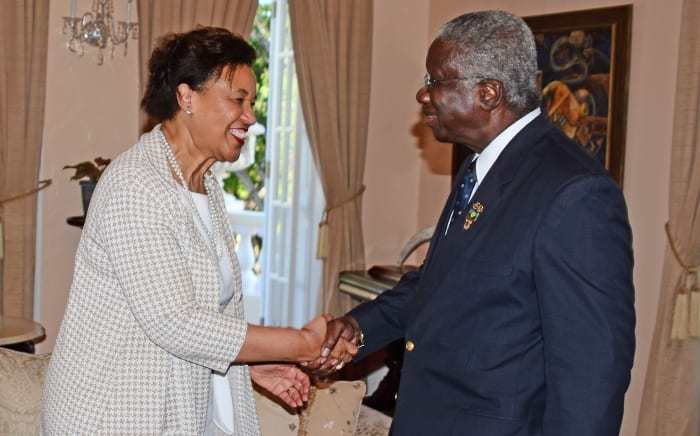 Commonwealth Secretary General, Baroness Patricia Scotland, has identified collective action as the best response to the challenges facing small states within the Commonwealth.

During a courtesy call on Prime Minister Freundel Stuart recently, Baroness Scotland maintained: “It is very important to have critical mass because when one small country tries to do it on its own, it does not work.”

She was responding to a comment from Prime Minister Stuart that some of the poorer Commonwealth countries which were offshore jurisdictions had to be constantly defending themselves against charges of illegitimate business practices and it seemed that there were concerted efforts to destroy the sector.

Baroness Scotland said that the Commonwealth had faced a similar challenge in respect of de-risking in the banking sector and the issues were addressed through a conjoined approach.

“We have seen it work in respect of correspondent banking…helping them to understand the impact on the offshore financial centres will have to be the same thing – a collective effort which gets across the need to allow countries to help themselves legitimately,” she suggested.

The Secretary General said the Commonwealth was also using the same approach in terms of trade and economic issues and was looking at creating tools to accelerate opportunities for countries to trade with one another.

We’re looking at creating best practice contracts and a Commonwealth Small and Medium Enterprises (SME) Act to allow small businesses across the Commonwealth to trade in a transparent and accountable way. Then we can say to the bigger countries that you can engage with SMEs which have been consistent with Commonwealth best practice. The majority of SMEs are either young people or women so if we want to accelerate opportunities for that grouping, this is it,” she stated.

The two officials also addressed the issue of climate change, with Prime Minister Stuart pointing out that the devastation caused by recent hurricanes in the region had erased any doubt about the impact of climate change and the importance of a vulnerability index.

Baroness Scotland agreed that the evidence was compelling and this was one of the issues on the agenda for the Commonwealth Heads of Government Meeting, scheduled for April next year in London.