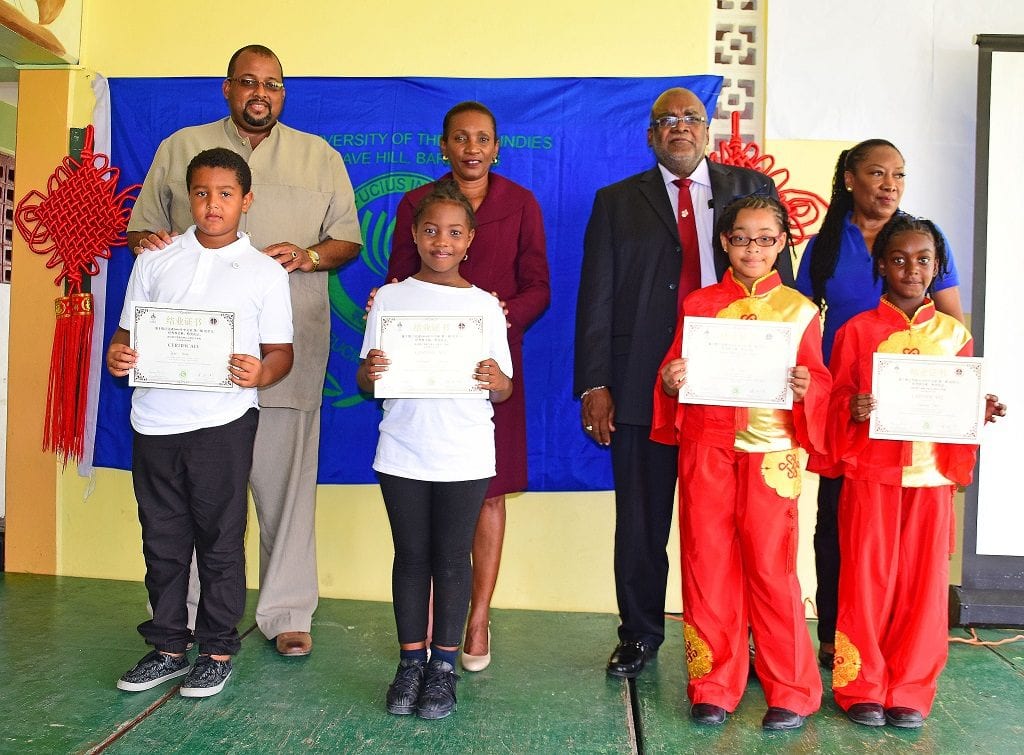 Over 100 students from the St. Stephen’s Primary School are the youngest cohort of Barbadian pupils to learn Mandarin and Chinese culture under the fledgling University of the West Indies (UWI), Cave Hill Campus’ Confucius Institute programme.

The 121 students from Class 1 and Class 2 graduated recently upon successfully completing a four-month foreign language pilot project, which began in February this year.

The ten-week class constituted a total of 14 contact hours per class in which the students were exposed to Chinese language and culture through the use of song, dance and art.

The UWI Cave Hill intends to broaden this project at St Stephen’s School in the coming academic year, 2016-2017, and also introduce a year-long programme at the same time to nearby Ellerslie Secondary School, which is celebrating its 50th anniversary at the same time as Barbados.

Permanent Secretary in the Ministry of Education, June Chandler, who witnessed the graduates participate in a number of cultural performances during the ceremony last Friday, said in her feature address it was evident that young children were far more adept at acquiring the sounds and rhythms of a new language when compared with those who start at a later age. She challenged the students to make a difference by becoming teachers and sharing their new knowledge with their families.

Ms. Chandler further expressed the hope that the programme would be rolled out at other primary schools since “early immersion not only allows for more time for language learning but it also allows our primary school pupils to attain a higher level of proficiency by the time they enter secondary school”.

“The world is fast becoming a global economy. It means that our citizens must have a competitive advantage, and becoming fluent in more than one language achieves this,” the Permanent Secretary declared. She added that it would take time and greater cooperation to fully integrate the speaking of Chinese into the local society. Quoting Confucius, she stressed ‘‘it’s not how slowly you go, so long as you do not stop”.

Campus Registrar, Ken Walters, told the students that as the Caribbean’s relationship with China grows, their ability to speak Mandarin and understand Chinese culture would be increasingly valuable. He said: “Who knows, you may end up studying in China, doing business in China, even living in China. And… you will all be better equipped to explain Barbados and the Caribbean to our Chinese friends.”

Mr. Walters noted that when The UWI Cave Hill Campus established the Confucius Institute last year, it wanted to provide an opportunity not only for university students to learn a new language but to make this opportunity available as widely as possible.

University of the West Indies