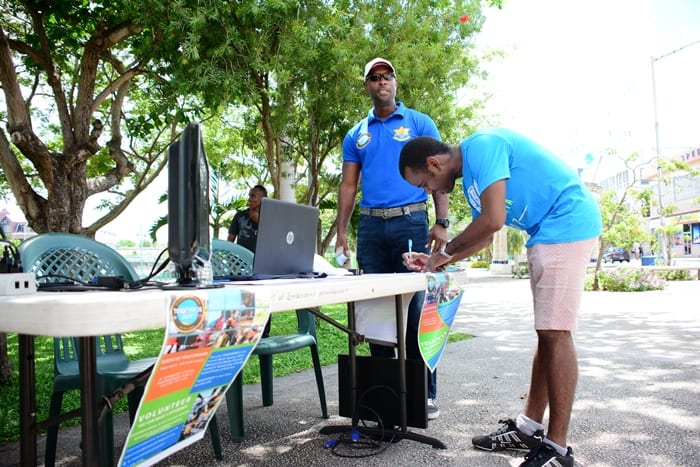 A volunteer signing up for Exercise Tradewinds in Independence Square, Bridgetown. (C.Pitt/BGIS)

Over 100 persons answered the national call to be a part of Exercise Tradewinds 2017 by signing up during a volunteer drive across Barbados on Saturday.

That figure will add to the growing number of persons signing up online for the regional exercise, which is being held in partnership with the US Southern Command and hosted by Barbados from June 6 to 12, under the theme: A Seamless States Partnership for a Secure Region.

Lieutenant in the Barbados Coast Guard, David Harewood, described the response to the drive in Independence Square as “excellent”, noting that over 20 persons made enquiries and expressed an interest in signing up within the first hour.

He added that as persons understood more about Exercise Tradewinds 2017, they were expressing an interest in getting on board and being a part of the exercise.

Lieutenant Harewood said all that was required of volunteers was for them to be 18 years or older, and to register.

“Once they sign up, we will call them [and] screen them,” he stated, explaining that volunteers would be used in scenarios at sea and on land. “They will be [used as] casualties, [and as] a type of an enemy force…so that we do not use the military, police, fire or the emergency management personnel to … pretend that they are the casualties,” the Lieutenant pointed out. 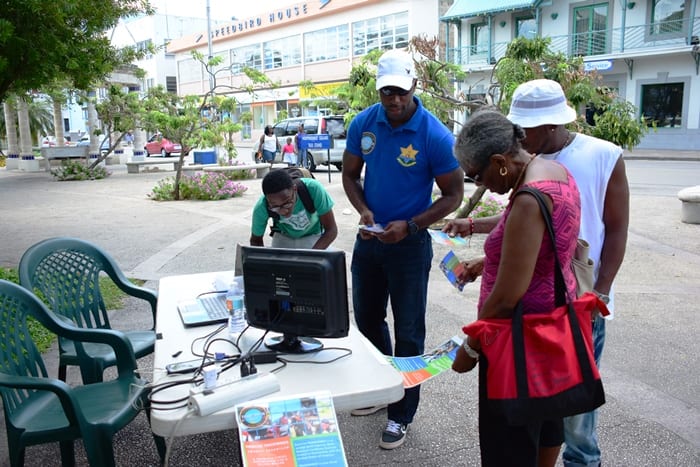 These passers-by stopped to gather some information on Exercise Tradewinds 2017 which will be held in Barbados from June 6-12. (C.Pitt/BGIS)

They may also collect application forms from the Secretariat at the Department of Emergency Management, No. 30 Warrens Industrial Park, Warrens, St. Michael; and the Barbados Government Information Service, at its new location in the Old Town Hall Building, Cheapside, St. Michael.

Alternatively, forms may also be collected from the Barbados Defence Force’s bases at St. Ann’s Fort, Garrison, St. Michael; Paragon, Christ Church; or the HMBS Pelican, Spring Garden, St. Michael. Completed forms may be returned to any of the above-mentioned locations for processing.