You would not find the contribution of trees to society in an economic report, nor would their success be measured by rating agencies such as Standard and Poors. Yet, they make an invaluable contribution to the social, economic and even medical wellbeing of countries across the globe.

Take for instance the sale of seasonal fruits such as mangoes, ackees, golden apples, plums and avocado pears, across the highways and byways of Barbados, or the presence of trees in parks and at beaches to offer shade from the sun.

Dendrologist at the National Botanical Gardens, Nigel Jones, noted that trees contributed to a country’s food supply; helped to maintain healthy soil; assisted with water augmentation; acted as a buffer to sound; was a filter for dust and mitigated the impact of climate change.

However, it is the native and indigenous plants such as the Bearded Fig, Mahogany and Baobab trees that have played, and continue to play, a critical role in the development of the island over the last 50 years and beyond.

Mr. Jones explained that “indigenous” referred to a species that was around from the time of discovery. In Barbados’ case, the Bearded Fig Tree, the Canewood Tree, the Poison Tree; the Locust, Papagun or Trumpet Tree, Calabash; the Sand Box or Dynamite Tree and the Silk Cotton tree are all indigenous to Barbados.

He explained that many of these indigenous trees were found in areas such as Turners Hall Woods, the gully ecosystems, and other forested areas across the island.

“Many of these species have compounds that are critical in terms of various medicines. Even though we have synthetics to use to cure ailments, these drugs were formulated from compounds from these trees, with some things added to make them more effective,” Mr. Jones said.

In contrast, the plant expert noted that “native” referred to the introduction of plants to the island, such as the Mahogany Tree, which was introduced to Barbados in 1763, the Baobab Tree and some of the island’s Cedar trees.

“We can’t say they are indigenous because they were not here before, but they were around for almost three centuries. If you are around that long, whether you are a tree, or a human being, you deserve status to be naturalised, so these are native trees to Barbados,” he remarked.

Barbados got its very name from the Bearded Fig Tree (Ficus Citrifolia) which was discovered on an unexplored, uninhabited Barbados as far back as 1536. The tree’s beard-like roots led the Portuguese to name the island Los Barbados (meaning the bearded ones) in those early years.

Mr. Jones explained that the largest known local specimen of the Bearded Fig Tree could be found at Marley Vale, St. Philip, located 200 metres west of Culpepper Island. In addition, he said, it could also be seen distributed across the island’s landscape, providing a habitat for animals such as monkeys, birds, bees and bats.

However, there is more to the Bearded Fig Tree than giving Barbados its name. The Dendrologist said the tree also had a high nutritional value, releasing vitamins, calcium, potassium, magnesium and iron.

“In addition to being a source of food, preliminary research has revealed that certain compounds extracted from this plant possess chemicals capable of fighting both breast and colon cancer,” he indicated. 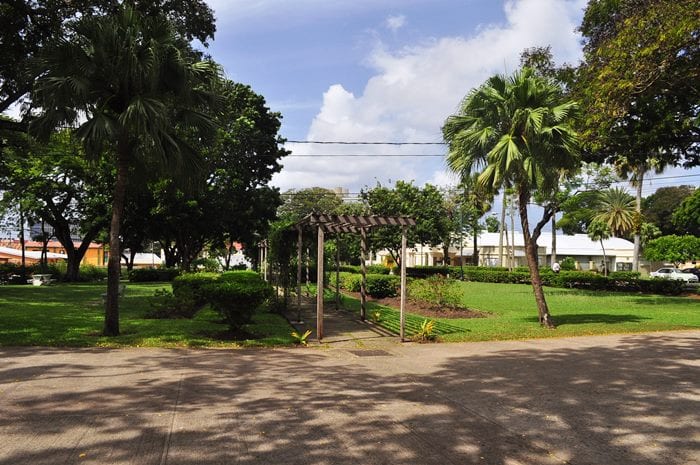 The story is somewhat different for the native Mahogany Tree (Swietenia mahogoni), which, though harvested consistently, continues to grow in abundance and continues to sustain a high quality furniture industry.

Mr. Jones explained this was because Mahogany trees thrived in environments where there was limestone, and therefore, even when cut, went through a process of natural regeneration.

He added that the Mahogany tree also contributed significantly to Barbados’ development over the years after being introduced to the island in 1763, with the first tree being planted at the Belle Plantation in St. Michael.

Mr. Jones explained that wood from the tree was used to make a variety of furniture over the years. “Today, wood products made from mahogany are regarded as prime quality, and are often used to furnish most of our historic buildings, and that includes Parliament,” he noted.

Meanwhile, the Baobab tree (Adamsonia digitata), known to most as the “monkey bread tree” or the “tree of life”, is used in drinks, energy bars, dietary supplements and a number of other nutritional products.

Mr. Jones explained that the indigenous inhabitants of the island used products from the Baobab tree to treat illnesses such as asthma, diabetes, hypertension, diarrhoea, malaria and some types of cancers.

There are two known mature specimens of the Baobab Tree in Barbados – one at Warrens and the other in Queen’s Park. Mr. Jones noted that historical records indicate that both trees are over 250 years old, but can live for over 1,000 years.

However, he lamented the fact that persons repeatedly break the bark of these trees by inscribing their names, unnecessary statements or messages on their trunks, particularly the one at Warrens, St. Michael. Such practices, he cautioned, could result in the development of a pathogenic fungal growth, eventually leading to stem necrosis and ultimately the death of the tree.

Mr. Jones stated that while Barbadians were cognisant of their indigenous flora, they were more in tune with those which were not around 200 years ago. Those, he said, included the mango, avocado, breadfruit, casuarina, Christmas, Neme, Flamboyant and Frangipani trees.