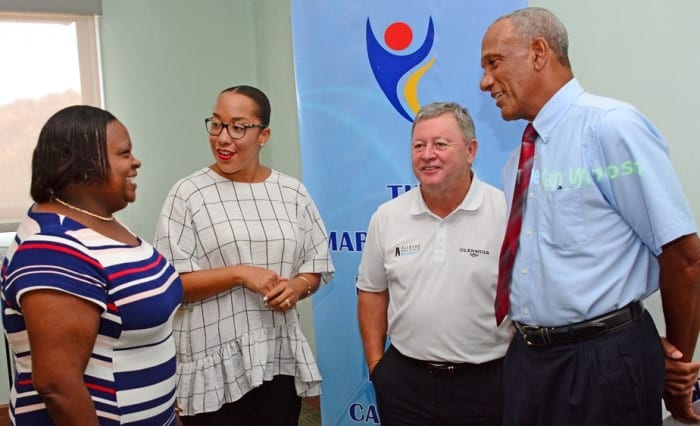 From left to right: Acting Senior Medical Officer with responsibility for Non-Communicable Diseases, Dr. Ingrid Cumberbatch chatting with Spokesperson on Type 1 Diabetes, Krystal Boyea; Ian Woosnam; and CEO of the Maria Holder Diabetes Centre for the Caribbean, Cally Boyea, during the official launch of a Type 1 Diabetes Registry for Barbados yesterday. (C.Pitt/BGIS)

The Ministry of Health has welcomed the launch of a Type 1 Diabetes Registry for Barbados, which will enhance national surveillance of the disease, and inform evidence-based policy and programme development.

According to Acting Senior Medical Officer with responsibility for Non-Communicable Diseases (NCDs), Dr. Ingrid Cumberbatch, while Type 1 Diabetes affected roughly one per cent of the population, there were no exact statistics pertaining to those affected.

“It is expected that this gap can be bridged by the implementation of the Ian Woosnam Type 1 Diabetes Registry for Barbados,” she said, adding that the registry would be a vital tool to empower, educate and support patients, as well as to improve standards of practice and care.

Dr. Cumberbatch was speaking on Wednesday at the launch of the registry at the Barbados Diabetes Foundation, Warrens, St. Michael.  An initiative of the Foundation, the registry was established through sponsorship by professional golfer and long-time visitor to Barbados Ian Woosnam, who has two daughters with Type 1 Diabetes.

Describing its implementation as another important step in the fight against diabetes, the Senior Medical Officer noted that it would be the first such registry in the Caribbean.

Type 1 Diabetes, previously known as insulin-dependent, juvenile or childhood onset diabetes, is characterised by deficient insulin production and requires daily administration of insulin.  Its cause is unknown and it is not preventable.