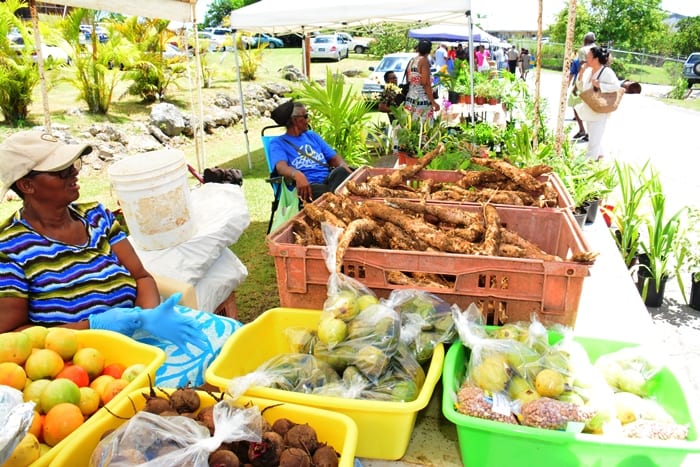 Exhibitors displaying their goods at the 2016 World Food Day celebrations at the Ministry of Agriculture, Graeme Hall, Christ Church. (B.Hinds/BGIS)

Farmers and land owners in Barbados are being urged to “come on board” and start utilising the incentive and rebate systems offered by the Ministry of Agriculture, Food, Fisheries and Water Resource Management.

This call came today from Minister of Agriculture, Dr. David Estwick, who chastised the farmers and land owners for allowing their arable lands to lay fallow, thus, according to him, contributing to a “food insecurity problem”.

“I have taken to the Economic Committee of the Cabinet a recommendation that in order to promote Food Security, what we need to do is to establish a mechanism where our national procurement system is linked to domestic production,” he disclosed.

The Minister added that if Barbados is to sustain its agricultural output and develop it, “it must first start at home.”

“It makes no sense that the QEH, the Geriatric Hospital, the Psychiatric Hospital, the School Meal service is accessing imported foods if those foods can be produced locally in Barbados.  It is your money that is going overseas to support other farmers someplace else…,” he charged.